Twelve years after opening in Sydney, Priscilla: Queen of the Desert – The Musical will roll her wheels into Brisbane for the very first time. It’s the tale of three drag queens and their bus (Priscilla), their (mis)adventures through the outback, and their interactions with Australian culture in all her vibrant, (but often aggressive and hostile), glory. Quintessentially Australian, the show, based on the famous 1994 film, has been a huge international success, playing on London’s West End and Broadway.

Original cast member Tony Sheldon played lead role Bernadette in all of these productions, earning both Laurence Olivier and Tony Award nominations overseas. Born in Brisbane, Tony is reprising the role in a 10th anniversary Australian Tour (he recently celebrated 1900 performances as Bernadette), and will return to his birthplace in September when the show opens at QPAC. QNews Magazine spoke to him about Priscilla, his experiences portraying Bernadette, and a career-spanning over 50 years in the Australian entertainment industry.

What can Brisbane audiences expect from Priscilla?

Spectacle, madness, glitter, glamour, silliness – and hopefully an underlying message that will leave you moved.

A lot has changed for the LGBTIQ community since the film was released and the musical opened. Has that changed the message?

It hasn’t. When [screen director] Stephan Elliott made the film, he wanted to show the ugly Australian in all aspects, [including] the straight community, the gay community, the drag community. A lot of it is now politically incorrect, but we didn’t want to adjust the show. We are presenting these characters, warts-and-all.

However, the audience has been exposed to more drag. We’ve got RuPaul and [other] stuff that has now demystified drag. A lot of the shock value has gone in seeing men dressed as women, and that changes the audience’s attitude. It’s more the audience changing rather than the show.

Priscilla is more moving than I expected.

The heart has always been our secret weapon. People don’t expect the show to be as good as it is, that’s the reason I’ve stuck with it for 12 years. There’s always stuff to find; a lot of levels to play, even though the dialogue is minimal and it’s really a string of production numbers. If [the audience] are open to it, they take us into their heart.

You’ve played Bernadette nearly 2000 times; how do you keep her fresh?

I never tire of her. It’s a road movie so you’re [always] in a different place, meeting different characters. If I come to the show every night as though I don’t know the story, and just let it happen, the story dictates keeping it fresh. That’s how I’ve done it; I keep myself open and let it happen anew every night. She’s such a well-rounded character; she’s a mother, a showgirl, a bitch, she’s hilarious, she sings, she dances, she wears fantastic costumes. Over 12 years, I’ve [found] a lot of different aspects.

Bringing that character from film to stage, did you feel pressure taking on an icon?

Not at all. I’ve played [other] parts from movies and other actors created them. You look at that performance and go, “Okay, but I have a different point-of-view.” Terrance Stamp [who played
Bernadette onscreen] said he wanted to play the pain of a woman trapped in a man’s body.

I thought, ‘That accounts for what I see onscreen. It’s a rather gloomy performance, but it’s an iconic performance’. I chose to go about it a different way. [Bernadette] was the toast of the town in the ‘60s. She was famous for being Australia’s first sex change; she worked at Les Girls where the American soldiers used to go during the Vietnam War. She was a big star in her day. I felt, ‘She’s a glamour girl. She knows how to have fun’. 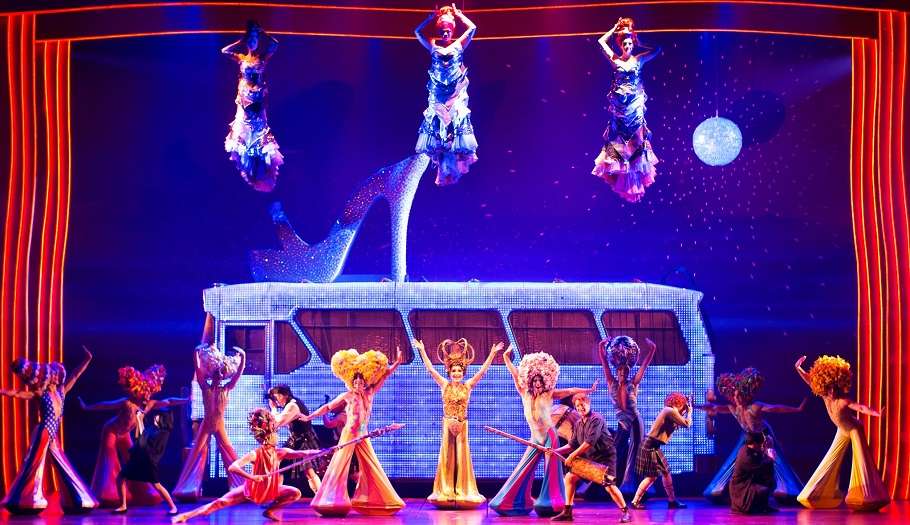 In her opening scene, she’s grieving her lost partner, but there’s humour in her embracing the melodrama.

It’s a great way to start, because she’s hit rock bottom. There’s nowhere to go but up in terms of emotion or narrative. She later qualifies her relationship, saying he was a nice kid with a thing about transsexuals. It shows the place she was at; she was willing to take what she could get. She’s a middle-aged woman, she has no prospects, and she’s keeping this kid who is – probably not in love with her – fascinated by her.

Maybe that’s the source of her grief. If she was famous and successful, it’s quite far to have fallen.

Exactly. What does an old drag queen do once her career is behind her? She’s very frightened. She’s alone. She’s unemployed. She’s probably broke. That’s why she has to take the gig. She’s always been adventurous, but I don’t think she has much of a choice.

Internationally, the other two lead characters Tick and Felicia were always changing, but you were constant. Is there a particular cast member you really enjoyed working with?

The original Australian cast were very dear to my heart. Todd McKenney came in as Tick; he brought a special glamour to the show, because he’s such a showman himself. He’s also a gay man with a child. The part resonated with him, and he brought a quality that nobody else has before or since.

I’m not blowing smoke but David Harris and Euan Doidge [Tick and Felicia in the current production] are an absolute joy. In every company, part of me criticises when working with others and I go, “I wouldn’t have made that choice,” but that has never happened with David and Euan. They’re so spot on with what they’re doing. They’re such adorable people and I love them.

There were adjustments to the show for an international audience – what were your feelings about that?

We went to London, and there was pressure from English producers. The expressions were changed, the language was changed, the place names were changed. At one point the Queen and her corgi walked across the stage! I felt we were starting to sell out. I threw myself on the mercy of the court and said to the production team, “Can we please trust this material? We’re losing what makes the show unique”. 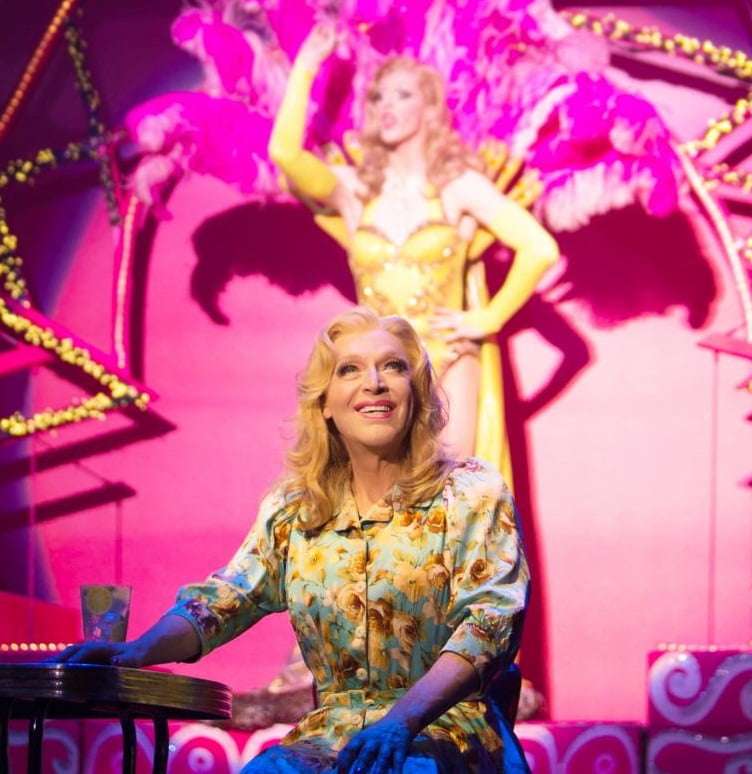 What makes it unique is its scrappy ratbag quality and the otherness about it – not only the characters being exotic, but the locale. I said, “Billy Elliott [the Musical] came to Australia and we didn’t modify it. We had to listen to those impenetrable accents and try and make sense of it – and we did. Let’s not underestimate the intelligence of our audience”.

In America, we trusted it more. Bette Midler, one of our producers, was very offended by the language and vulgarity – Bette Midler? Really? I was so shocked. She wanted it cut, but we stuck to our guns.

That’s courageous of you as a performer, to have that conversation.

I was very lucky because I was with the show from the first workshop. I was given a very free hand making suggestions and writing jokes and restructuring scenes. That relationship stayed right through to the Broadway production. I’ve always felt able to speak up.

To be involved from the workshop, to be heard by the producers; that’s not common.

No, and the director and producers stuck by me [despite] opposition. Michael Crawford wanted the role [in] London; Ian McKellen was after it. Real heavy-hitters put themselves up for the part, and the Priscilla creators – bless their cotton socks – said, “We want Tony.” They fought for me. They fought equity in both countries because they said I was the only one who could play the role. That hardly ever happens and I owe them everything.

The heart of the show is that it’s so Australian. Did you expect international popularity?

Absolutely not. I didn’t expect a life past the first workshop – I wasn’t an enormous fan of the film. I couldn’t see how they were going to put the desert on stage. It was so wonderful to see the process. Originally the three guys were singing everything, and the choreographer said, “If I don’t hear a female voice soon I’m going to scream.” They came up with the wonderful idea that every time we were miming to a tape or something, they would sing, and whenever we were ‘off-stage’ and being ourselves, we would sing. The divas have become part of the attraction of the show, so that was brilliant.

The concept of replacing the desert with spectacle, a sort of Ziegfeld Follies-type costume parade– like a dream sequence almost in every number – is inspired, because rather than the desert, we have this wonderful variety show. It’s very clever; it irritates me when I hear the show dismissed as a “jukebox musical” because there was no cynicism putting this show together. There has been constant effort to refine it and make it the best it could possibly be. From what I’m hearing, this [the current production] is the best version.

The costumes alone, embracing the excess of drag when they’re literally in the middle of nowhere, is very clever.

But the drag isn’t slick. There’s the feeling that, ‘We made those costumes on the bus with a stapler and a glue gun.’ There’s something homemade about those costumes that I find very witty and unique. 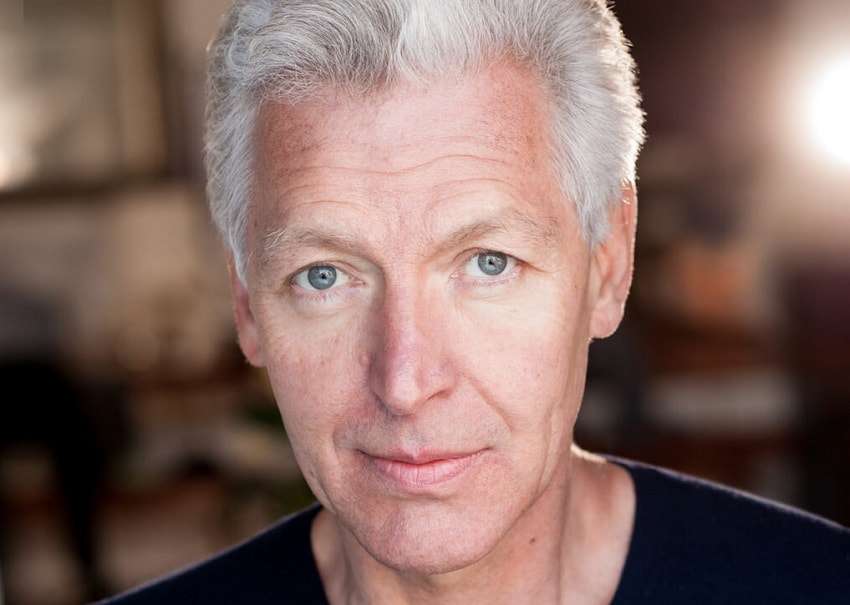 Apart from Bernadette, is there any role that sticks out as a favourite?

Well, you’re talking about a 50-year career. Torch Song Trilogy was the first commercial show, and it was groundbreaking in terms of gay theatre in the ’80s. That was a massive role, it was four hours every night, and I was never off-stage! Stephen Sondheim’s Company was also one of the happiest experiences I’ve ever had.

But Bernadette is career-defining at this point?

I never expected to go overseas with [her], let alone create a role in an Australian musical on Broadway and the West End, and be nominated for a Tony Award. I owe so much to Bernadette and Priscilla because it changed my life and the course of my career when I least expected it. Suddenly the gates opened to the world and transformed absolutely everything. I owe Bernadette the second act of my life.

Priscilla owes Tony a great deal in return. His gratitude and love for Bernadette is evident in his fragile, nuanced, heart-warming performance. Having seen the show, I can attest the producers were wise to fight for him. Their insistence on his international reprisal is a testament to the strength of his performance. Priscilla: Queen of the Desert – The Musical opens at the Queensland Performing Arts Centre on September 26 and is playing for only 4 weeks – so get your tickets to see Tony and the cast in this moving, celebratory spectacle while you can!

Disco Diva: Wanda Dparke back to Bilo with Candy Featherbottom