A photo of Fifty Shades of Grey actor Jamie Dornan with a very visible large bulge in his pants has gone viral on social media.

The Irish actor posed for a seemingly innocent photo at the edge of a golf course that was posted to tourism board Discover Northern Ireland’s Twitter account with the caption “Look at that view!”

But it wasn’t the gorgeous coastline that captured the attention of Twitter users, it was the bulge in Jamie’s tight grey pants.

“Spectacular view! Landscape and beach aren’t bad either,” one Twitter user commented on the photo.

“He is simply pointing out the direction to go. How nice of him,” another wrote.

But there was a simple explanation.

“I wonder if he realises he left a golf ball in his pocket?” one eagle-eyed user pointed out, ruining everybody’s fun.

See the pics below:

This is the best picture of the “golf ball” 😉 (pic credit to owner) #JamieDornan pic.twitter.com/pkZUY2oQhi

Despite Dakota Johnson’s nudity in Fifty Shades of Grey,  Jamie Dornan stayed clothed for the most part of the movie. Indeed, only his butt made it onto the screen. Even that butt probably came courtesy of a body double.

However, Jamie Dornan previously stripped off naked during his modeling career. Full frontal nude shots from that shoot are readily available on the internet.

We include a censored version here, not because of any fear of a large penis, but out of love of using eggplant emojis. 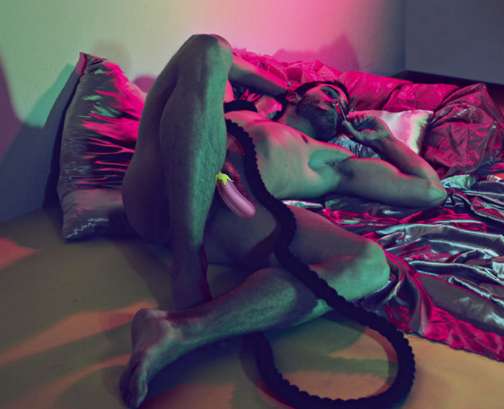