Although convicts in Australian penal colonies endured harsh conditions, some resilient folk made the best of a bad lot. None more so than the lesbian ‘flash mobs’ at Hobart’s Cascades Female Factory and other associated ‘houses of correction’.

Cascades Female Factory functioned as a workhouse for female convicts. Set up in 1828, authorities intended that it sequester convict women from the corrupting influences of Hobart Town and foster ‘proper feminine behaviour’.

To keep the inmates employed, the factory took in sewing and washing. Some, however, worked outside the institution, assigned as low-paid domestic servants to Hobart households. Many complained of abuse during their employment. That sometimes included rape by the master of the house or even gang rape by male servants.

The functioning of the female factory suffered from inept management, low staff numbers and the corruption of some of those staff. Leaders emerged among the prisoners and, as a group, they became a de facto management level of the institution.

Another female factory operated at the town of Ross in the midlands of Van Diemen’s Land (Tasmania) from 1848 until 1854 and another at Launceston in the far north. Both of those institutions also hosted flash mobs.

The unholy sisterhood of the lesbian flash mob

In 1841, Hobart’s Colonial Times exposed the female factory as a hotbed of lesbian vice. It characterised the prison elite as a lesbian ‘flash mob’, so-called for their flash clothing. Some had the prison seamstresses re-purpose their prison uniform as male garb. They wore silk scarves and rings in their ears and on their fingers. They also wore their hair short. The prison punished infractions by shaving heads. Need a haircut? Swear at the matron!

The Colonial Times reported that many of the flash mob passed for men.

“On [a new inmate’s] introduction to the interior of the Factory, she perceived what she supposed to be a number of men in the yard… The woman was, naturally enough surprised, and much more so, when upon closer inspection, she discovered that these supposed men were women!”

Overjoyed that the flash mob’s licentiousness gifted it licence to pontificate on the normally taboo subject of sex, the paper stopped at nothing in its effort to paint a picture of Sapphic lust using naught but cliché.

The ‘unholy sisterhood’ possessed a ‘fiendish fondness for sin’. They practiced ‘frightful abominations’ secretly in the ‘dark and silent hour of the night’.

The purple prose no doubt pandered to the prurient taste of the mainly male readership.

The paper depicted members of the lesbian flash mobs as sexual predators who used every effort “to acquire proselytes to their infamous practices.” No doubt that happened, as true of the factories as of prison life anywhere.

Dr. Irvine, the superintendent of the Ross Female Factory later reported the same.

“The young and comparatively innocent class of female convicts, appear to be those on whom the unenviable choice of the pseudo-male is fixed.”

However, not all the new inmates required coercion. The superintendent also wrote of younger inmates primping and preening for the benefit of the mob.

“These young girls are in the habit of decorating themselves, cleansing themselves scrupulously, and making themselves attractive as they can, before resorting to the ‘man-woman’ on whom they have bestowed their affections.”

Life in the factories.

Life in the factories was tough. The government renovated a failed distillery built on damp swampland for the Hobart factory and installed inadequate sanitation. The mortality rate among both the convicts and their children compelled sympathy from even the mob’s sworn enemy, the Colonial Times.

However, the women made the best of their incarceration They enjoyed various of life’s little luxuries, though not at government expense. A doctor described the factory fare as ‘scanty and unhealthy’ but the mob did not rely upon the government ration.

According to the Colonial Times, a woman assigned to an outside position “must return to the Factory, so soon as she has obtained (we need not say by what means) a sufficient sum of money to enable herself and her companion to procure such indulgences, as the Factory can supply, or, rather, as can be supplied by certain individuals, connected with the Factory.”

A later inquiry heard employers struggled to retain factory women as servants. While employers denied them such luxuries as tobacco, rum, gin, brandy, eggs, tea and sugar, they could purchase all that on the sly in the factory.

The bloke who supplied wood for the fires secreted grog among his logs. But the biggest profiteers were Mr. and Mrs. Cato, the deputy superintendent and deputy matron. They would obtain anything for a price. The day they were caught, Mrs. Cato was about to roast a plump chook, obtained as commission on contraband smuggled in only minutes before.

Some of the women lived very well indeed, managing to somehow obtain assigned positions, as the paper implied, in local brothels.

Once they earned enough money, they committed some small offence to expedite their return to their ‘companion’.

Former inmate Eliza Churchill spelled out to a Launceston inquiry that those ‘companions’ were actually cherished loved ones.

“There are many women who will not stay out of the factory when others with whom they carry on an unnatural connection are in the building.”

She named various women in relationships and told the inquiry any attempt to separate the couples would result in a riot.

Increasingly confident of their control over various elements of prison life, the flash mob became bolder. An indignant official reported in 1841 just how bold. Women were observed “in the very act of exciting each other’s passions — on the Lord’s day in the House of God — and at the very time divine service was performing.”

No surprise there. The flash mob had nothing but contempt for fire and brimstone preacher Reverend William Bedford. They called him Holy Willy and once, according to a not entirely trustworthy memoir, attempted to detach Willy’s willy.

“Some dozen or twenty women seized upon him, took off his trousers and deliberately endeavoured to deprive him of his manhood.”

Whether or not that happened, the mob no longer feared anyone observing their love and lust. The superintendent admitted to an inquiry he sometimes came across groups of women singing and dancing naked. They gestured obscenely at each other and acted in “imitation of men and women together.”

The Lieutenant-Governor of Van Diemen’s Land despaired of what action to take.

He reported to London on the problem of the “fancy-women, or lovers, to who they are attached with as much ardour as they would be to the opposite sex.”

He made plans to do something — anything. However, allegations then arose that he sometimes attached himself to ‘fancy-women’ other than his wife. He was dismissed and his plans abandoned.

The sex life of the lesbian flash mobs

The women of the flash mobs spoke of ‘nailing’ each other. Ann Fisher told an inquiry, “The expression they mean by nailing is indecently using their hands with each other’s persons.”

According to the aforementioned Dr. Irvine, MaryAnn Elliot, one of the ‘pseudo-males’ was “peculiarly sought out… [by] those addicted to these most depraved and abominable habits.”

The doctor explained that some of the ‘pseudo-males’ had a “preternatural development of an organ peculiar to the female.” He meant the clitoris. That, he said, enabled them to “assume partially the function of a male.”

In other cases, women utilised “artificial substances, mechanically secured to the person… [as a] substitute for the male organ.”

Dr. Irvine worried the sexual activity caused palpitations and perhaps even ‘structural diseases of the heart’.

He’d make a very poor cardiologist. We now know that raising the heart rate is just one of the health benefits of sex.

Eventually, the transportation of convicts from England ended and the government closed the factories.

What happened to the devoted couples when the factories closed?

I don’t know. My hope is that they had the chance to settle somewhere and grow old together. 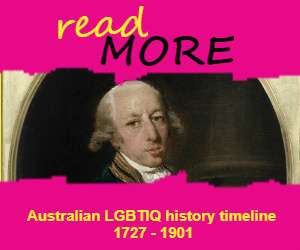